After 10 years, the wife starts to think their kid looks kind of strange. So she decides to do a DNA test. She finds out that the kid is actually from completely different parents.

Wife: "Honey, I have something very serious to tell you."

Wife: "According to the DNA test results, this is not our kid."

Husband: "Well you don't remember, do you?? When we were leaving the hospital, we noticed that our baby had pooped. You said: Please go change the baby, I'll wait for you here." 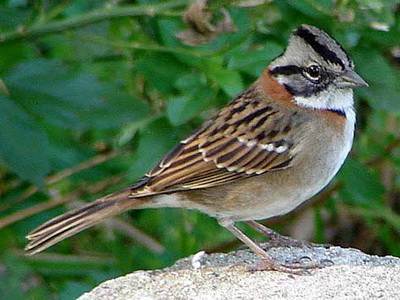 Mohawk first came to my attention when I went to see his group, "Zonotrichia Capensis". They were playing at the Aviary in downtown Guayaquil, visiting from their usual territory in Isla de la Plata. He's a hell of a singer, being able to trill notes like nothing I've every heard. And his stage presence? Well he can hop with the best of them. I instantly wanted to get to know more about this strange singer, but I was to be thwarted for quite some time.

When I first approached Mohawk, there in the club, he simply flew away. I don't think it was from me, per se, because the entire audience had flocked to the stage to get to know this mysterious stranger. But he simply fled.

It wasn't until three weeks later when I spotted him near the river that I got my chance to meet him. "Hello," I lied, as soon as I was in earshot. "I won't hurt you."

"You can never be sure, but if we simply sit quietly with each other for a few months, I'm sure you'll grow used to me."

"I remain skeptical, but if you want to hang around in a comatose state, who am I to argue?"

I instantly went into a coma, probably as a result of a post-hypnotic suggenstion contained in Mohawk's music. It was the best year of my life.

My first thought was, he lied in every word, That hoary cripple, with malicious eye Askance to watch the workings of his lie On mine, and mouth scarce able to afford Suppression of the glee, that pursed and scored Its edge, at one more victim gained thereby.

What else should he be set for, with his staff? What, save to waylay with his lies, ensnare All travellers who might find him posted there, And ask the road? I guessed what skull-like laugh Would break, what crutch 'gin write my epitaph For pastime in the dusty thoroughfare.